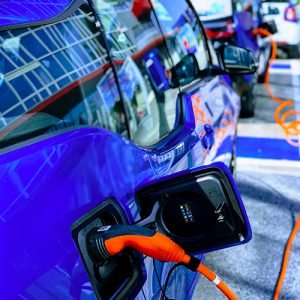 Electric vehicles (EV’s for short) are the coming thing in motor transport; some of the major manufactures such as Nissan with their Leaf model have made serious inroads into the private vehicle sector and in the next two years all the big manufacturers are planning to release a range of fully electric vehicles.

To start with, it is worth stating that electric cars are more expensive like for like than equivalent petrol or diesel model. As an example, the base model Nissan Leaf starts at £27,995 whilst an equivalently specified Nissan Qashqai starts at £19,995. Volkswagen completed a survey of the public in 2018 and one of the public’s concerns was the initial outlay required to purchase an EV. However, as more manufacturers get on board with manufacturing EV’s the cost will be driven down to become more in-line with more conventional vehicles.

To make things fair we are going to take two vehicles one electric and one petrol, priced the same on a 3 year PCP deal covering 10,000 miles annually. It’s important to note that at the end of the three year period, the vehicle will be worth a pre-agreed amount that takes into consideration the value of the car at the time you started the agreement and the value at the end of the agreement. You normally have two choices at the end of the agreement, which is to either pay the final payment or continue with a lease on a new vehicle. Now different vehicles will depreciate a different amount over their lease period, but to keep things simple we are going to assume that they have depreciated the same amount, so the final payment is the same

The initial value of the car is £29,000 and we are going to put a deposit of 10% down, the dealer is going to make a contribution of £1000 towards the deposit and our final payment is going to be £19,000. There is interest applied to the amount borrowed during the lease period, on average this is 7%. In total this leaves us with £6100 to be financed over the lease period. This would leave us with monthly repayments of £299.

So far our cars are both costing the same each month. However, the petrol car is of a higher spec, it has a better interior trim level, sporty alloys with low profile tyres, parking assist and a heads up display – the EV doesn’t have any of this as I’m paying for the technology that’s involved in making the EV a viable driving alternative to the petrol.

Based on just the figure above, when looking at what you get for your money, the petrol car is so far coming out on top. The next thing we are going to look at is running costs, starting with tax. Now tax varies depending on the CO2 emissions of the particular vehicle. My petrol car sits in the middle of these bands. This means for the first year I pay a fee of £165 and every year after that I pay £140. This means my total over three years is £445.

My EV however produces no CO2 emissions; this means that my tax is £0, which is an immediate saving.

Cost of fuel is the next thing most people think of. My petrol car consumes fuel at an average of 38 mpg, which is about normal for a modern mid-sized petrol engine covering the 30,000 miles over the three years in my lease; this is going to cost me approximately 12p per mile or £3600 total over the three years.

My electric car has an average range of 150 miles on a full charge. To fully charge my car at home cost approximately £6.60, or 3.5p per mile. Over the three years of the lease and covering the maximum 30,000 miles this is going to cost a total of £1050.

Insurance is the next consideration. Here is where EV’s lose out to more conventional vehicles. Because the technology is new and the numbers are still small compared to petrol and diesel cars, insurers do not have a huge bank of information regarding repair costs etc to draw upon, as a result EV Insurance premiums can sit around 25% more expensive. In this instance my petrol car has cost me £475 per year to insure, giving me an overall cost of £1425 for the three years. My EV is 25% more expensive so costs me £593 per year, totalling £2375 over the 3 years.

There is one additional cost to owning an EV that is worth considering however and that is a dedicated charging system for your home. The advantage these have over using a conventional domestic socket circuit and a charging lead is the speed with which they can charge the vehicle. Using a normal circuit it can take up to 13 hours to charge a Nissan Leaf for example, from empty to fully charged. A dedicated charger can reduce this time down to as little as three hours. The cost of installing these can range from as little as £300 for a basic charger installed into a property that requires no remedial work to getting on into the thousands of pounds if your property is in need of an electrical upgrade before an installation can be completed. The government offers an incentive scheme called OLEV for which you may be eligible. If you are eligible for this scheme and use an OLEV registered installer you can claim 75% up to £500 back off of the installation cost.

At first glance 9p per mile doesn’t look like much of a saving, however after over 30,000 miles and three years that’s a total saving of £2700.

This article was contributed by independent writer Annie Button. Find out what else she’s been up to on Twitter: @anniebutton1994‘

This website uses cookies to improve your experience while you navigate through the website. Out of these cookies, the cookies that are categorized as necessary are stored on your browser as they are essential for the working of basic functionalities of the website. We also use third-party cookies that help us analyze and understand how you use this website. These cookies will be stored in your browser only with your consent. You also have the option to opt-out of these cookies. But opting out of some of these cookies may have an effect on your browsing experience.
Necessary Always Enabled
Necessary cookies are absolutely essential for the website to function properly. This category only includes cookies that ensures basic functionalities and security features of the website. These cookies do not store any personal information.
Functional
Functional cookies help to perform certain functionalities like sharing the content of the website on social media platforms, collect feedbacks, and other third-party features.
Performance
Performance cookies are used to understand and analyze the key performance indexes of the website which helps in delivering a better user experience for the visitors.
Analytics
Analytical cookies are used to understand how visitors interact with the website. These cookies help provide information on metrics the number of visitors, bounce rate, traffic source, etc.
Advertisement
Advertisement cookies are used to provide visitors with relevant ads and marketing campaigns. These cookies track visitors across websites and collect information to provide customized ads.
Others
Other uncategorized cookies are those that are being analyzed and have not been classified into a category as yet.
SAVE & ACCEPT
Call CleanCar
Go to Top